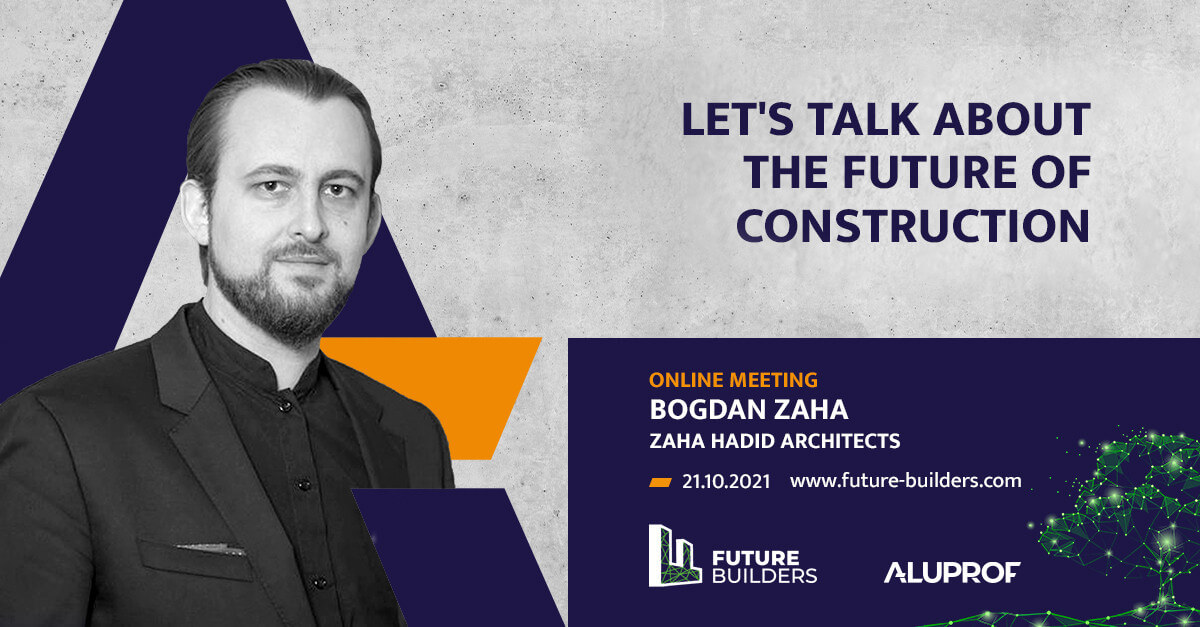 When we believe in individuality and the uniqueness of each and every person, it can be hard to accept the fact that many people’s behavior follows certain patterns. However, this can be studied and used to benefit society. Bogdan Zaha, the latest guest in the Future Builders series of interviews, provides proof of this. The lead architect of the renowned Zaha Hadid Architects practice, he combines design with parametric modelling and advanced geometric design methodologies.

Piotr Żabicki, PhD, opened the conversation by emphasizing that state-of-the-art tools have provided designers with a wide range of aesthetic potential. Can parametric architecture also be used for other aspects, such as quality of space, though? Bogdan Zaha cited research into parametric semiology which he was involved in at the University of Applied Arts in Vienna. As he explained it:

With that study, we focused on a computational tool that makes it possible to predict people’s behavior... how they’ll move around and use the space that’s being designed.

As an architect who sees this new approach to design as an opportunity for improvement in meeting challenges and problems, he went on to clarify that:

In complex simulations, a range of parameters are used. At first glance, they might seem abstract, but they’re based on analyses of reality.

“Parametricism is more than tools. It’s a way of thinking about architecture and its social role.”

How do modern technologies affect the work of architects? In Zaha’s opinion, there can be no talk of changing the face of the profession, but only of improving it.

It’s architects who design buildings. It’s a simple fact. We do it more effectively and with greater awareness. In the past, our work was based on intuition, the knowledge acquired by those who came before us and the ‘build, try and test’ method. Thanks to new tools, prediction, and simulations, it’s possible to approach architecture differently, to reduce the time that some stages of the work take and achieve far better results.

“What we can do is mainly related to problem-solving. There isn’t necessarily a requirement to be artistically creative.”

Zaha is also relaxed about the future of the profession and sees no threat to it from machines. As he put it:

Tools don’t possess the most crucial of skills, in other words, the ability to think critically. Well, they don’t yet, at any rate. There doesn’t seem to me to be a threat. Not until such time as artificial intelligence becomes more developed.

In his view, new technologies should not be feared. We should be glad that we have tools at our disposal which enable people to do their jobs better and also reduce the monotony of their tasks.

Future Builders. Where various viewpoints and predictions for the future clash

Will the cutting-edge technologies used by Bogdan Zaha dominate the construction industry and become the basic tools for the builders of the future? Answering that question unequivocally is difficult, but the session with this globally renowned architect certainly fitted the concept of the Future Builders initiative, which was set up by ALUPROF SA in order to enable recognized experts from all over the world to present different potential paths to development in the sector.

I’m delighted that, thanks to Future Builders, I have the chance not only of sharing my knowledge and perception of architecture with people, but also of learning something from others and drawing on their experience. Events like this are a good time for reflection and can offer a multitude of pluses for the construction industry.

It was with these words that Bogdan Zaha summed up the first series of ALUPROF’s Future Builders sessions. The previous guests were Alvaro Siza, Robert Konieczny, Przemo Łukasik and Zbigniew Maćkow. Recordings of all the interviews can be watched on the home page of the Future Builders website and on ALUPROF’s official YouTube channel. Podcast versions are also available on the Future Builders official Spotify channel.