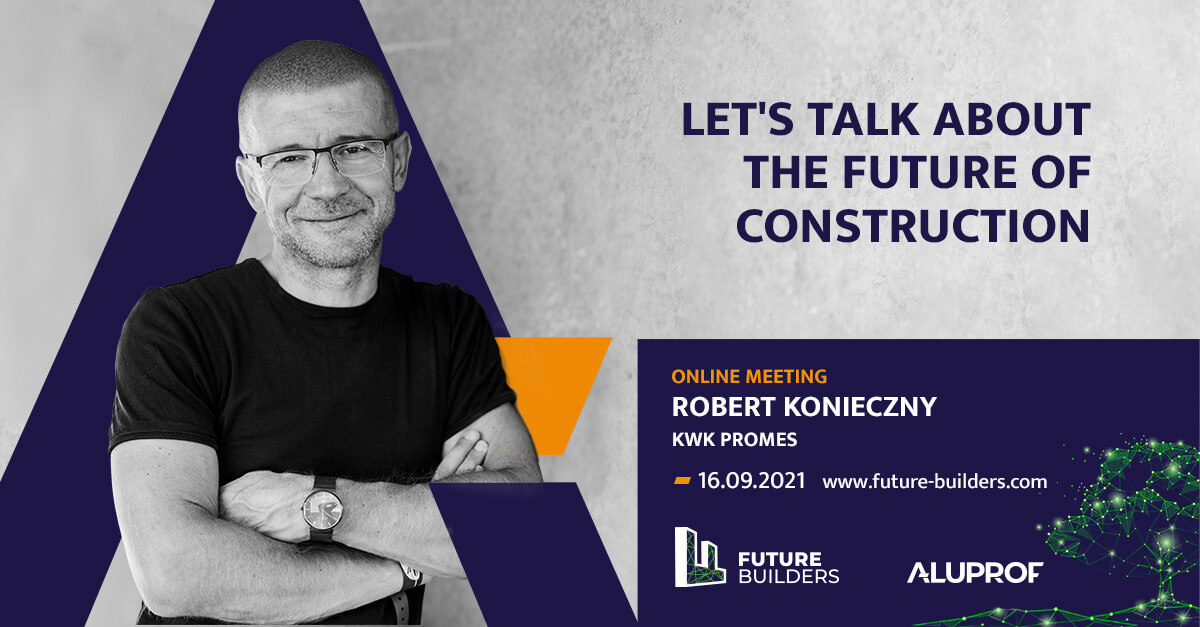 “I’m a passionate champion of cities and towns. And I do everything I can to accommodate growing urban populations wisely.” This statement was made by Robert Konieczny on 16th September when he was a guest of ALUPROF SA’s international initiative, Future Builders, a series of interviews with authoritative architects on the topic of the challenges facing contemporary architecture and urban planning. Robert Konieczny, co-founder of the KWK Promes architectural practice, is the winner of numerous accolades at home and around the world and comes close to topping the list of award-winning Polish architects. His ‘Ark’, in the village of southern Polish village of Brenna, was named House of the Year 2016 by “Wallpaper”, a prestigious, London-based magazine.

Asked about the future of architecture and cities, he set out to answer from several perspectives, ranging from the context of the pandemic, via the role of greenery in architecture, to carbon footprint reduction and the ethical side of building, both of which are the tasks of the architect and the developer. He illustrated his theses not only with an abundance of recollections drawn from successfully completed projects, but also with examples of practices which have been introduced into his own company as a result of those experiences.

Konieczny issued a warning against the ‘concretitis’ and ‘develeporitis’ destroying Poland’s cities and towns. Like many another influential architect, he sees an important role for the well-though-out use of greenery in building welcoming exterior and interior spaces. He also talked about the pandemic-driven ‘desertion’ of urban centers in favor of suburbs and rural areas. He believes that this is an opportunity to redefine what cities are for, who they serve and how they are used.

As he put it, he himself lives in Katowice. His office is just a few kilometers from home and he tries to make the journey by bicycle, even in winter. The issues of sustainable transport and, more broadly, of carbon footprint reduction were set between a calculatedly controversial thesis to the effect that “every newly built home is an evil” and pacificatory explanations demonstrating that there should, quite simply, be a shift so that new builds are more economical in terms of both construction and running costs.

The conversation also featured plenty of positive statements about recycling and about renovating former industrial buildings which, following a change of function and context, go on to serve their surroundings well. This theme was also illustrated by a presentation of one of the buildings from KWK’s abundant portfolio.

What about ‘a house for everyone’?

Here, Piotr Żabicki, PhD, who was running the interview, brought up the government’s notion of accessible houses of up to seventy square meters, built in line with a simplified permits procedure. Like many members of the architects’ community, and with allusions to the official standpoint of the Polish Architects’ Association, he and Konieczny pointed out a number of weaknesses in the program and made mention of the fact that the lack of practicing architects not only among those entering the relevant competition, but also among the members of the bodies approving the designs, we are facing the threat of “further devastation to Poland’s beautiful landscape”.

In opposition to this, Konieczny talked about an idea of his conceived years ago, his ‘optimal house’, which is built using minimal construction materials. The idea was abandoned, but has now returned in the form of the DOM OPTYMALNY / OPTIMAL HOUSE program, the face of which is Konieczny himself, with ALUPROF SA as the initiative’s technological partner.

Is architecture a profession with a mission?

The social dimension of architecture and the specific ethics by which an architect should be guided were two more topics that were essential to the discussion. Konieczny warned against several dangerous phenomena, one of which is excessively flattering clients’ tastes and preferences when they run contrary to the rules for the art of building, an approach which can lead to ugly, non-functional buildings. Another is disregarding the context of the place where a new building will stand; the reference here was to ‘ready-made’ designs. The third hazard that both interviewer and guest pointed out is the underestimation of a design’s value in terms of a development’s entire cost. In their view, “every zloty spent on a good design is a whole lot of zlotys when it comes to the value of the finished building”. It would be hard to disagree with their point. After all, buildings that move way beyond clichés and thus obtain value are buildings that stand out from others in their design and concept and not in “the quality of their concrete” as one of the participants in the forum which accompanied the interview remarked.

The interview was held as part of Future Builders, a platform for discussing the future of creating cities. This international initiative is the work of ALUPROF SA, a European leader in the aluminum joinery sector. The program features architects from Poland and abroad who work on the most progressive of international projects. As Robert Konieczny emphasized:

I think there should be more conversations like this and it’s highly commendable that a platform where we can exchange views has been set up. I’ve got hordes of questions myself and there’s a host of things I ponder and this kind of conversation triggers reflections that we’ll turn into actions. Without that, we’ll never move forward wisely.

More information about Future Builders’ guests and descriptions of the events can be found at www.future-builders.com.